TAT - For those who finds Tapas Fleming`s TAT method interesting 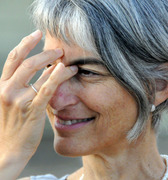 A group for those who finds the TAT life method interesting - it was founded by Tapas Fleming. TAT is a method that can help you overcome traumas and things that is blocking you from having a fulfilling life.

This group does not have any discussions yet.


Tapas Fleming began her passionate search for truth at age 15. For many years her focus was on enlightenment, interpersonal relating and emotional release. In 1974, Tapas was initiated into natural meditation, a yoga-meditation for purification and liberation. After losing premature twins and coming close to dying herself, she went to school to learn acupuncture and focus on her own healing. In 1993, Tapas came up with a new simple and elegant way to serve her patients -- Tapas Acupressure Technique (TAT). She is a leading force in the emerging field of energy psychology. Tapas lives in Redondo Beach, California where she has a private practice and travels worldwide to give TAT trainings.

THE TAT® STORY (HOW I CAME UP WITH TAT®)

Both in my own life and as a practitioner of Traditional Chinese Medicine, I have often wondered how to get myself or a patient out from under the negative influence of past events. However much therapy or meditation or other forms of healing one undertakes, certain issues never seem to get resolved once and for all.

I cannot claim to have painstakingly arrived at a solution to this dilemma. Tapas Acupressure Technique (TAT) came to me after taking a nap in my office one day. I woke up with the thought of a particular acupuncture point and how it could be used for healing a person's whole system. I was specializing in allergy work at the time, using a combination of acupressure and acupuncture, based on the methods of Dr. Devi Nambudripad of Buena Park, California. The acupuncture point is called Urinary Bladder 1 (UB1) or "Eyes Bright" as it is called in Chinese.

I immediately began to incorporate this point in my treatment of allergy patients with great success. After several months, a new patient told me, "My T'ai Chi master told me to use that point with one other for headaches and other problems." Although my insight was based on my training and experience as an acupuncturist, this simple confirmation of my own experience meant a great deal to me. I added the third point the yT'ai Chi master mentioned.

After another few months, I was contemplating the fact that the occipital area of the brain is the vision center and that the points I was using for treatment were related to vision. I thought that perhaps if I included the brain's vision center in the treatments I was doing, it would enhance the treatments. It did. An entire layer of complication in my allergy treatments (combining an allergen with other substances in order to achieve a complete clearing) was no longer necessary with the addition of placing the back of the hand on the occipital area of the head. The healing was more complete with less steps.

What I have discovered from using TAT goes beyond what I learned as part of my professional training. I discovered in my acupuncture practice that our bodies, not just our minds, have memories. Not just our memories, but the memories of our ancestors. If we stop and think about it for a minute, it becomes obvious that our bodies are the product of our parents' bodies. We look like our parents, and often have similar health problems as our parents. Well, to take it many steps further, our parents' bodies came from their parents' bodies, whose bodies came from their parents' bodies, and so on for a long, long way back. The color of your hair and your eyes, the shape of your hands and feet, your bone structure, and some of your health problems are the legacy of both your recent and ancient ancestors. Just as car manufacturers base new models on a long line of previous designs rather than reinvent the wheel, you are the latest model of your ancestry.

Again, I did not come to this conclusion through study and thought, but through experience in my clinical practice. For example, I was working on a patient who was allergic to dust. As I was treating her I "saw," you might say psychically, a farmer pushing a plow and breathing in copious amounts of dirt. Big clouds of dust rose all around him as he followed his plow. Without mentioning the complete image I was seeing, I just talked to the patient about the dust of the land where she was living, and in her conversation to me she revealed that she came from a long line of German farmers. What was coming to me from her body was what I would call the cellular history of her present life in this body. Our bodies have living histories which we could call cellular memory. When an ancestor experienced something traumatic, that memory seems to be stored and passed down at a cellular level.

I was inspired to explore cellular memory more deeply when I worked with a patient who, by her early 30's, had been in nine car crashes which she hadn't caused. She had suffered a concussion and other major traumas to the head, and was suffering from constant neck and headaches with a couple of migraines a week. The story I "saw" was about a young boy of eight or so who was in a mountain cabin with his father. A crazy mountain man came in and killed his father, smashing his head open. When I mentioned this, my patient was silent for a few moments, then told me that her father had fallen, smashed his head, and she was there when it happened. She then told her sisters about what had come up, and her sisters told her that they knew of two men in the family who had been murdered by people smashing their heads in. The sisters also talked about the fact that their young children had already suffered an inordinate amount of concussions and blows to the head in the course of their growing up.

I began to realize that I had been given the gift of seeing the history of the cells of a human body and a way to heal the traumas that had been passed down from generation to generation: TAT. What I have learned from working with many friends and patients in these last several years is that when the story of those cells is heard, they release the stored trauma they have been holding and are able to rejoin the organism they are part of and get on with this business of living. Using TAT, a person doesn't have to have a conscious or psychic vision of what happened. The TAT pose itself along with your focus on a trauma creates a connection between the cells' memory and your function of vision. You "re-view" the trauma and it is integrated in a few moments.


WHAT IS A TRAUMA AND WHAT DOES TAT® DO?

A trauma occurs when life becomes unbearable and you tell it "No." Or variations on the theme which could include: "Hold it right there." "This is too much for me." "If this happens, I won't survive." This is not necessarily a conscious choice. It is a natural response to your life in that moment. This response sets up patterns of mental, emotional, and physical behavior and health. A blockage, or energy stagnation has just been put in place and your life has been impacted. It seems like a good idea at the time, but you lose the ability of distinguishing the difference between a truly life-threatening event and an event that merely has certain aspects that resemble the original traumatic event. It is as if life were a flowing stream, and at one point, out of fear, you roll a boulder into it to try to dam the flow in order to keep a traumatic event from happening to you. The water, of course, simply flows around the boulder, but in your life - in your body, mind and emotions - there is a blockage that wasn't there before.

From the view of Traditional Chinese Medicine, a blockage of energy flow creates disease. If you consider the blockage as a boulder in your body's life flow, you can easily imagine that the life energy that would naturally be flowing along certain streams is going to be diverted. On the upstream side of the boulder, there will be dammed up energy, on the downstream side you will find a lack of energy. This creates emotional, mental and physical disharmony which is also known as a yin-yang imbalance. On one side is too much, on the other is not enough. The goal of Traditional Chinese Medicine is to achieve balance.

TAT is a way of saying to your whole body-mind: "Have another look at this." It is an opportunity to change, based on taking a new look, rather than continuing to look away. By taking another look, within the context of TAT's direction of the body's energy flow, the charge that is still being held is removed from the past event and the event can now be integrated into your whole system.

What has that charge been? It's traumatic stress which is simply the stress to your system of continually trying to hold off a trauma. That event really did happen. Working to deny its existence or hold it away from you is stressful. Traumatic stress ends when the trauma is no longer resisted. TAT accomplishes this in moments.

I would say that TAT reunites a person with parts of himself or herself that have been locked away or frozen in time. There are many ways to describe the results of TAT. Integration, harmony, peace, unity, connectedness, relatedness, oneness and wholeness are a few of the terms people have used to express how they feel after doing TAT.

I heard about TAT through my mum, she had seen a television show about it, and she recommended me to read about it, and try it out. She has tried it herself, and says it works. I want to try it myself, you can get a `how to do TAT` booklet on her site, and if you find it interesting I would definitively recommend you to check it out!

Comment by Nina Klokset on October 31, 2009 at 11:46am
Well, yes, but at the time I did not do it 100%, to many thoughts in my head, - in other words, a hard time focusing on it....yet I have decided to try it again, because I do believe that its a good method to use in order to let go of things, get a more fulfilled life and so on. I have in the past days come to a new era of my spiritual path. - Very exciting!!!! I`ll keep u updated on my experience with the TAT method! :)

You need to be a member of TAT - For those who finds Tapas Fleming`s TAT method interesting to add comments!