A few weeks ago my therapist handed me a contract. A contract containing the principles that I have been guided by for a long time, principles that have ruled my life completely.

What he actually gave me was a piece of paper, totally empty, but even so I immediately felt I didn't want to look at it. At all. A few days later I started to write, trying to identify these principles. It was a really depressing list of principles I came up with…

Day 57 How do I welcome abundance?

Today I would really like some advice from you cocreators out there!

I have begun a new habit, drawing three angel cards every sunday night to guide me through the following week. The first card for this week was that of Abundance and I was really happy to see that!

Working on my healing-goal I use affirmations to convince myself that I am worthy of love and friendship, to feel that love is already all…

Do you ever feel like you are stuck? Like whatever you do, pounding on that door as hard as you can, it just won't open?

This weekend I read a column by a swedish journalist I really like, Karin Thunberg. She wrote about the necessity of finding new ways, sometimes even unvoluntarily.

It was that day or that evening when we took a decision,… 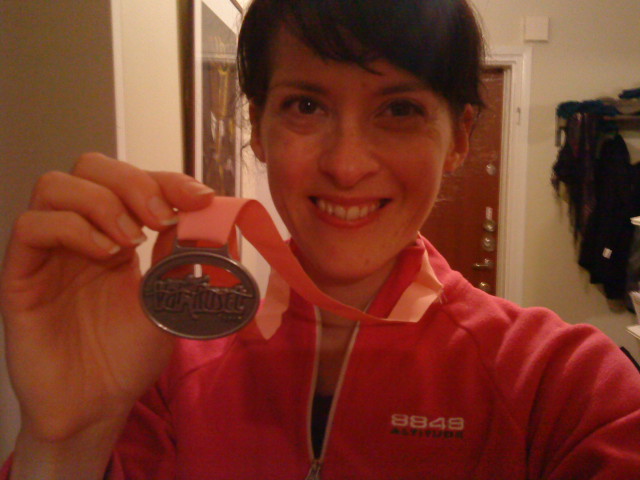 Today I participated in Vårruset, a race just for women that takes place in all of Sweden every year. It's only 5k but it's a nice happening and afterwards everyone (30 000 in Stockholm only) has a picknick in a beautiful green area.

This was my second year running the race and I only began running at all last spring after having had an operation that made it impossible for me to go to aerobics class. I had always hated…

Day 43 Making the law of attraction work with energy

Earlier today I read a post on this blog with a link to an interview with an author who has written a book about the conncetion between energy and the law of attraction. Her theory is that people who have a lot of energy to back up their intentions with succeed more easily than people with low energy.

Day 40 Manifestation of a home 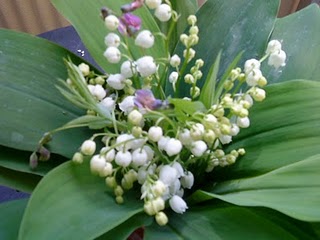 Today my stuffy nose finally cleared up a bit and I could feel the smell of the flowers I picked friday. A bouqet of Lily of the Valley! They are so beautiful and smell fantastic, AND I picked them right outside my appartment!


I keep getting amazed by my new home. I bought the…

Just wanted to add a quick post about something I read this morning in the newspaper. Yesterday I read Sunshine's post on how helping someone made her frequency get higher, which I can really relate to. Apparently reasearchers have studied this phenomena and what it does to our brains, getting help from munks who are very…

When I got home after training yesterday my throat was aching and I immediately started thinking of all the things I would miss if I fell ill right now, dragging myself down into negative thinking. I had two cloves of garlic (oh my God that was strong!), some fresh ginger and lots of green tea before I went to bed, hoping it would get better.

And suddenly two weeks flew by and I am exhausted. Lots of fun things have happened ; I have bought some things for my appartment, painted my kitchen and tried to arrange things as I want them. I have also been dancing salsa, tango, foxtrot and bugg (a scandinavian kind of swing dancing) and that has been great, I seriously don't know who I would be anymore if I wasn't dancing!

Rearranging my apartment and dancing are good things, I feel…

Today, on my last day of a two weeks detox programme, I brought some chocolate balls to work to celebrate with my closest colleagues. I told them they weren't ordinary chocolate balls but healthy ones and they all looked at my really suspiciously and promised to taste them just to make me happy. They did taste them, and they loved them!!

So, here is the recipe that a few of you cocreators have asked for, it's quick and easy, you just need a… 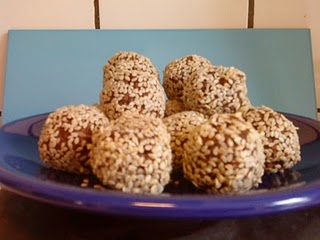 I never thought a detox would permit eating goodies like chocolate balls, but this one does! OK, they're not ordinary chocolate balls with butter and sugar but they sure look like them and they taste VERY nice:-)

The ingredients are dates, coconut flakes, water, sesame seeds, cocoa and cashew nuts. I have really indulged in them today as a reward for having run 5 kilometers - first time out running since october. It's still pretty…

Today I woke up with a stuffy nose, caused by a cold or pollen allergy. My first reaction was disappointment. Disappointment because my first week of detox has felt really, really good! Eating healthy, wonderful, tasty food, respecting my decision to take it on and feeling so greateful to myself for doing is. And now this stuffy nose, it just doesn't fit into the picture.

Later today, at a session with a therapist I see from time to time, I…

So this is the season of healing and acceptance, and I have found some advice on acceptance that I would like to share with you. I read them out loud every day in order to remind myself. I will try translating them from swedish.

• In order to avoid suffering you need to fully accept what is.…

Sometimes it is difficult to see the progress you make because it takes time. In order to create something you need to know what you want to create, and I have always had difficulties formulating what it is I really want in life, or even right now. Two years ago I read somewhere (might have been in Susan Jeffer's book Feel the fear and do it anyway or Bill O'Hanlon's Change 101: Practical Guide to Creating Change) that "wanting" in the sense of being willing…

I just have to make a quick post because I really feel inspired right now! On my lunch break I listened to one of Lilous posts about water. She describes a routine in which one thanks the water you are about to drink in order to affect it with the right vibrations.

This reminds me of a book I once read that I can really recommend,…

Day 9 Are the gods playing tricks on me?

It seems that every time I decide I am going to find another job, something happens in my current position that makes me think it's worth staying for another few months. The thing is I really like my colleagues and the things we do - I work for an environmental organization - but for two years I have felt frustrated about not developing at all, not getting enough challenges and being somewhat drained of creativity.

This time, having finding…

I slept really well tonight, not thinking about the interview I was to do in the morning. I had breakfast, got dressed and made up, without being at all nervous. Just before the radio station called me I managed to raise my vibration to a happy and enthousiastic level and I felt pretty much relaxed during the whole interview although it went out live. Just as I had imagined, I felt proud of myself afterwards and went to work feeling I could handle just about…

One would think that after four seasons of the 100 day challenge I would know what the law of attraction is about and how it works. The problem is I have always had difficulties describing exactly what it is that I want, and I have always had difficulties letting things go and believing everything will just work, relaxing. I am not saying that the goals I have put out there have not manifested, several of them have! But, I realize I am often making things unnecessarily…

This season I have decided to take on two major goals; attracting a new job and healing - body and soul.

On my first day I met an acquaintance after work who has earlier expressed his interest in me romantically which made me very uncomfortable since I don't feel the same way. This time though it felt more like we were becoming friends, just trying to figure the other person out in a relaxed way, very nice! I told him about the 100…

So this is day 99 of my fourth season of the 100-day challenge. I would very much like to gather just as much enthousiasm for the fifth one as I had when I began my first. I will, because I have decided this is the year of change and for that I need courage to let go of the old stuff och invite the new, and I really really want the fifth season to be a powerful one. I´ll be back.