Neville Goddard - Believe it into existence 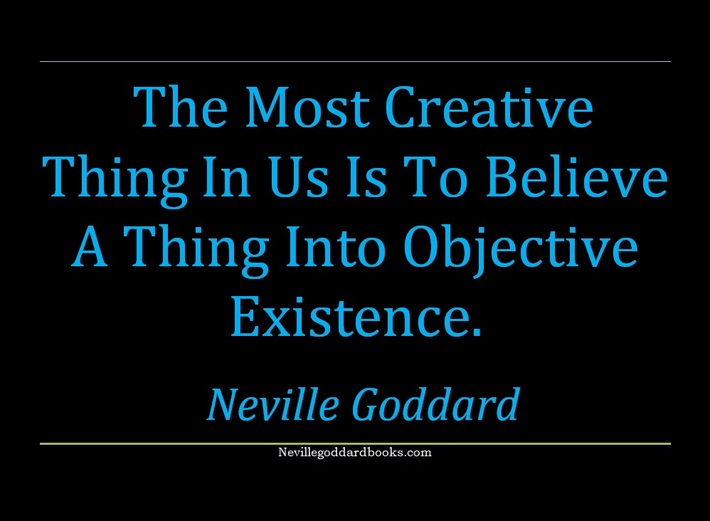 You Can Prove You Are All Imagination

You can prove you are all imagination if you believe it, for you live by your beliefs. Lip service is not enough. Belief must become alive. Do you really believe your imagination makes all things? Then test yourself and see. When confronted with any problem, immediately construct an imaginal solution. Enter into that image and abide in its truth. Always remember who the maker is, for he makes things out of that which does not appear…

Neville Goddard - When You Imagine A State

When you imagine a state, do you believe that the scene has the power to externalize itself? Or do you feel you must pray to a being on the outside for help? I tell you: there is no being on the outside. The creative power of the world is housed within you now. Sit down and imagine a state of confidence that it must externalize itself. Believe that because all things are possible to imagine, the state you have imagined must become an external fact.…

Gratitude sends out the message that you already have what you desire. You must always at all times think in terms of already having the object of your desire in your physical reality. Along with those thoughts should be the feeling of the most intense gratitude for what you have already received from the universe. Gratitude makes the object of your desires a real, tangible aspect of your own reality, and the more real it is to you the sooner it will manifest into your personal experiential…

Loving you, Imagination gave himself to you by becoming you that you may become Imagination, who is Christ.  There never was another Christ and never will be another. - Neville

Let the Church stop its work of hypnotizing the masses, and deceiving children even for the briefest interval of time, and men would begin to understand Christ's teaching. But this understanding will be the end of the churches and all their influence. And therefore the churches will not for an instant relax their zeal in the business of hypnotizing grown-up people and deceiving children. This, then, is the work of the churches: to instill a false interpretation of Christ's teaching into men,…

I think about forgiving ...

Every now and then I give my attention to forgiving.... I tend to think that most people have no idea what the whole process of forgiving is or does... can it or does it free us? Is it a cause that opens doors to more freedom? Below is an excerpt from Emmet Fox.

How many of us understand exactly how mental laws affect our lives? I know I don't fully grasp them ...YET... but every day I believe I will be rewarded by studying and giving my attention to better grasping how my…

The Truth That Sets Us Free

What greater gifts could be given you than to be told the Truth that will set you free John 8:32]?

Is Silence an option or does it really have implications?

We read in God's Word that he will give to us according to our work; that he will bless those who keep his commandments. He admonishes us to reverence His name, pray in silence and not to talk too much. When you talk too much you give out your energy, your strength and your secrets. The ancients claimed that what you retained for your own must be kept within yourself. There is an old saying that a thing talked about continually never happens. People who talk much, or make…

Our awareness of being does not ask permission...it expresses what we are aware of being

Your awareness never asks permission to express that which you are aware of being. It does so, naturally and without effort, in spite of the wisdom of man and all opposition. - Neville

Neville Goddard Books At Your…

Truth is created within!

I have learned so much about how our minds function over the last 4 or so years that it blows me away... and I've still probably only tapped into less than 1% of it's potential. THAT is the best part.... to know that what I have learned so far is and has been transforming my life for the better and to still realize the humongous upside to it..... that is mind blowing.

How many people know... and not just know but consciously apply the principle of if I see it or feel it…

How our brain works

This is why we should not be critical of other people.... our brain does not know that we are judging another so we end up condemning ourselves for what we see in another.

If it's negative WHY would I believe it? I REFUSE to believe in anything negative ever again!

I believe.... no... I KNOW, that if people knew HOW our minds worked they would be very careful with WHAT the agree to as far as their beliefs are concerned. I lived MOST of my life believing that if something can go wrong it will.... and that's just the way things are and there's nothing we can do about it, to name a few. Little did I know that it was my very own beliefs.... what I personally believed that was creating MY lifes conditions and not the beliefs of others. No wonder if…

I LOVE to STUDY the Subconscious mind....

To me ... how the subconscious mind works is about as hard to comprehend as it gets. Sure on the surface it seems easy enough... but to live it, to apply it every minute of every day.... which to me is REQUIRED if you in fact KNOW the POWER of the subconscious mind.....

Below is a quote from Neville Goddard..... to REALLY understand this... is amazing.

MY understanding is there are TWO ways to live.... through our senses.... or our imagination.... one we walk…

Identifying myself with imagination ....

When man finally identifies himself with his Imagination rather than his senses, he has at long last discovered the core of reality. - Neville

Scripture tells us to "Seek and you shall find: and when you find him, you will be like him." I tell you, you will never find your fulfilled desire until you are the desire!

Proceed to claim your own; give all the power of mind and thought to the great truth that you do possess now, in the real, everything that you can possibly need or desire. Give full recognition to the boundlessness of your own spiritual riches, and live in the conviction that whatever you claim possession of in the within you will gain possession of in the without. - Christian D. Larson

everything unfolds from within

If you see Jesus as an historical character, it is because you do not have the courage to face the brilliant light of the revelation of truth. I know when it came to me, everything within me fell. We are told that in the end all of the buildings will fall. These buildings are the structures of the mind by which we live.