Breaking the habit of being “you.”

Powerful ideas from one of my favorite teachers!

Interesting info from Dr. Joe Dispenza (one of the featured speakers from the movie, "What the Bleep @#!"

The Mysterious Workings of the Adolescent Brain

I really love the info in this TED talk by Sarah-Jane Blakemore!

I stepped away from CCOR for a bit but didn't put the brakes on my intentions of manifesting!
I simply found that I was spreading myself a little too thin but now have a strong desire to return here to get the support I miss and love!

Accountability to a team of loving, high-vibing and like-minded folks has always seemed to do wonders for keeping me on track with my intentions!

Along with my ongoing intentions that are listed on my profile…

Hey CCOR friends!  One of my FB friends (Ted Black), has started a cool new FB Group called:
GEMS of EXPERIENCE: Personal Stories of Dreams Come True!
If your interested in sharing your manifestations, moments of synchronicity, law of attraction experiences, etc, please feel free to join the open group at the link below.
(You can just join to read the stories of others if you wish!  They will be very inspiring, I'm sure!)

Here's the link to the group:…

Are you LIGHTING A FIRE UNDER YOUR ASSets?
(In a moment, I'm going to introduce you to two words that just might be the biggest fire-starters you ever met....but for now)....
Man, why do we always seem to chronically procrastinate when it come to OUR DREAMS?
What FEARS snuff out OUR Inner Spark to make stuff happen?

Feeling inspired is easy when you're feeling good.
But what about those times when you're simply exhausted and feeling more stuck than ever?
Does it feel like a physical issue?
Does it feel like depression?
Are you struggling to understand what it is exactly?
A helpful technique that seems to work well for many people (including myself) is one…

When you were young, did one or both of your parents ever put you in the corner?

Even though mine did NOT, for some unknown reason my mother, (who had me at 17), decided that a "bad-girl-in-the-corner" shot would make for a memorable photo, (hence the attached photo.)
I actually remember her taking this picture. She even painted my nails for the occasion. I'm not sure if she wanted to have "proof" that she wasn't a pushover or…

Good news! Remember when you said you wish someone would invent shades that would keep the sun out of your THIRD eye?
Well, apparently someone has.
Shine on you joyous deliberate creator, you! 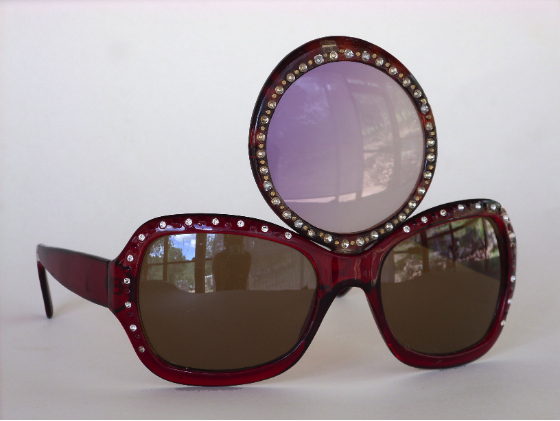 What to do with your Hooseyfuffer.....

I think a really excellent stand-in name for that "gremlin/shadow-thingy" that keeps getting in the way of your dreams would be a Hooseyfuffer.
You don't have to take directions from your Hooseyfuffer any more.
You know what to do.
Your Hooseyfuffer just "THOUGHT" he knew better while convincing you to play small and buy into your fear.
But love on the other hand.....well,
LoVe is VERY powerful thing.
Make your Hooseyfuffer… 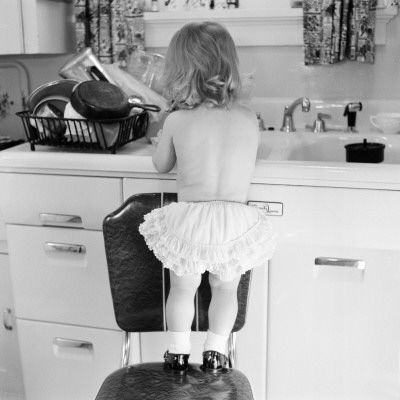 There isn’t much that a kick-ass attitude, snazzy bottoms and a REALLY excellent step stool ensemble can’t fix. ~Elise Burdick

PS.  If it seems out of reach, find a way to get there!

HEY YOU! (yes, YOU!)--
When is the last time you expressed curiosity the way a child does? It's far too easy to move about in our lives without ever noticing all the amazing things that we pass every single day!
So today----(and tomorrow and the next)....
Get curious.
Curiosity leads to living fully in the present moment.
(and feel free to post if you see something that you normally pass everyday but just happened to notice now that…

Taking over my mind!

Tomorrow I am spending the entire day with my Inner Critic. We will be on a road trip so it will just be the two of us negotiating a plan for me to take over my mind as the new sole proprietor.
I'm not sure I have words for how thrilling this is going to be for at least one of us.

How do you wake up in the morning?

Have you ever questioned who you are or why you do the things you do? Are you living on autopilot or are you the master of your own destiny?

Do you wake up every morning and create your day, or do you just let it unfold as it happens?
What might change if you deliberately set about envisioning an awesome day before your feet even hit the floor?

Ahhh, yes.  Much to ponder!

For everyone who grew up in a painful childhood----
It is often so challenging to express and see the best in ourselves if we grew up abused in any form of the word.
But here is something worth pondering---
Feeling worthless, ugly, or unlovable is a choice.
(Isn't that an uncomfortable and strange way to think of those negative labels? That they were a "choice?" Sounds a bit condescending at first doesn't it---as if some…

Holy Moly I manifested a spot on the new GOOGLE CHROME commercial!

So back in October I got a phone call from an ad agency saying they represented GOOGLE CHROME and they had seen one of my videos from my Happy Life Makeover series, (that I've been posting here on CCOR) and they were interested in using it for a commercial in their latest campaign called, "Make it Happen!"
Of course I agreed to do it!  At first I was completely confused because the video that they were pulling the 2-second clip from was not one of my favorites by any means, and, it only…

Do you do this everyday? And what might happen if you did?

How about taking a minute to close your eyes, inhale (and exhale) deeply, then find something to appreciate in your life that you rarely notice!

I'm appreciating my plants in my home office. They keep me grounded with nature when I'm committed to working indoors. One of them has been with me for almost 20 years and has seen me through a lot---sort of like my recently departed dog Rupert! So thanks…

What are you practicing all day???

What are you busy practicing all day?
Anxiety? Joy? Self-criticism? Mind-blowing bliss?
Every moment is a chance to reach for the best feeling you can get to.
Find things to appreciate where you currently are and before you know it, you've shifted your vibrational frequency. There is always something to appreciate if you look for it.

WHO are you REALLY???

So who are you anyway?
Do you ever think about why you "like what you like," "don't like what you don't like," and "do what you do?"
Sometimes it's a real eye-opener to put all your paradigms out on the table for personal review.
Perhaps some of your behaviors are no longer a good fit. Perhaps it's time to shake things up a bit?
Do you live on the safe side? On the edge?
What is one thing that…