How does everybody keep track of what day they are on? Do you write it on a calendar, or count it out each time or what? You'd think I would have learnt by now. But the last time I did a challenge, I kept losing count - and I think that my days were aligned with Lilou's or someone else's so they basically did all the work. I wish there was an app for it or something... well there must be some sort of trick. I just haven't figured it out yet.

It has been so, so long since I have been here!!

But over the past few months I have really felt a growing need to organise my life and days better; to put in a bit more structure to my time, and this site kept popping into my mind, so I figured why not give another season a go.

The other week I found one of my old diaries where throughout it I had listed various intentions and goals, and so many of them had come…

Well, I found it very pleasing to awaken to some glorious sunshine this morning. It was like a visual breath of fresh air after several days of what felt like grey torrential rain wrapped in greyness. Usually I love the rain, but sometimes enough is simply enough!

So I would like to post my intentions for today. I hope that getting them down in writing will somehow draw some extra power to them... And since I have to go and spend the morning in a…

Popping by for a Visit

Well my friends, it has been a very, very long time since I have been here last. Lets just say that my life became very movemented (if that is even a word) since my last visit. Lots of fun indeed. And finally it seems as if the waters may be settling a little bit into a more peaceful state now, so it's nice to pop by and have a visit and see what is going on around here. I don't feel ready to start a new season just yet, but it is lovely to soak up the positive vibes, and perhaps start… Well, I have had quite a couple of weeks since my last update. Filled with changes, big and small, and (hopefully) lots of growth.

My college class started again two weeks ago, and it is absolutely amazing. Better than expected. I have a feeling that completing this…

S4 D21: Just a Quick Little Blog Post B'cos I Promised I Would

So I said that I would do my best to keep up  a bit better with the blogging, and here I am.

This is just a little speed-blog update (unless I start rambling on as usual, but will try not to. Must. Stay. Focused.)

Today was quite a relaxed day for us. Nice and peaceful. I even went to the library with my girls. They love going and choosing a pile of books for themselves....And I even found Jack Canfield's 'The Success Principles' cd set. So I borrowed…

Well oh my googly gosh, I just realised this morning that I haven't posted a blog here in over a week!

Lots has happened in this time though. And loads of manifestations. (Maybe my birthday being last week has something to do with it? lol) Yesterday I realised that the wish list that I wrote in December during the Winter Solstice (which was also a full moon and blue moon - the best time, they say, for writing intentions lists)...nearly everything has already come true and…

Today my girls had a couple of friends over, so we had a pretty crowded apartment, and noisy too and I spent most of the time cleaning and clearing up after them *lol*. But they had a great time, and…

Yay! I'm back again. Wow, how fancy, we can change text colours now and everything! This is great!

I've decided to call this Season 4 again too, because I did so little of Season 4 last time that it wasn't funny.

My main intention for this next 100 days is to remain in the Flow, remain in Alignment with the Divine part of myself, to keep on appreciating all the wonderful gifts and blessings that I receive every day,…

Okay, so what have I been up to these past few days? Emotional ups and downs. That's for sure. After an email I received, I let go a bit more of my need and hope for appreciation from an important figure in my life.

If someone you love doesn't appreciate you for who you are, but only for what you do, I wonder if their opinions should be given much value? If they are going to judge or reject you just because…

Long time no see. I have decided to start my Season 4 from scratch after it kind of just petered out a few months ago. I just got too distracted with other things.

But I figured, that since I am already doing what my intention is for this Season, it might be nice for me…

Hello Beautiful People,
Well, I don't know why, but I am really feeling loved up this evening. Just feeling SOOOOOOO good. It doesn't really make sense either. The weather is drizzly outside, the afternoon at work was a tiny bit stressful, but I'm still just feeling so good now. I love it!
I am also so, so, so happy because when I got home from work a little package from Amazon was waiting for me. Doreen Virtue and…
Continue

Wow! Is it already day 14??? When did that happen???
We've been having a bit of an eventful week at home. My daughter has been having some issues with a friend at school - which hopefully have been resolved now. I just have to say, though, how much I appreciate her class teacher, and how great she's been throughout all this - as always. She really is one of the best teachers that I have ever, ever encountered, and it's such a shame that she has to retire after this year :(…
Continue

S4: Day 3 Being Careful with my tone & the essence of my Intentions

Well, day 3 is just beginning, so I'll write mainly about yesterday. So far so good. I enjoyed a bit of walking in silence, I didn't get any major insights, but I did feel pretty good for most of the day.
I did find a couple of times though, that I had to stop my thoughts and words in their tracks. Because even though it appeared that I was speaking or thinking about what I wanted/what I preferred, the underlying feeling and energy was about the…
Continue

Oh yay!! I'm back! I've been meaning to do another CCOR season for aaaaages!! So, today being a new moon and all, I thought it was absolutely perfect! It's great to be back here.
Already I've had a breakthrough too! At the moment I'm reading 'Money and the Law of Attraction' by Abraham-Hicks and 'Trust Your Vibes' by Sonia Choquette. And I'm reading much more actively this time, so I've got my highlighter out and everything. And I'm telling you, it is making such a…
Continue I'm back from Rome, and all sun-tanned to prove it. We had a fantastic time. I really enjoyed going to the beach, and swimming in the beautiful, warm sea. I'm so glad the water was warm this year. Last year it was freezing, and I only went in once. So I made up for it this time as much as I could! ha ha ha.

Nonno (my girls' grandad) took us on a day-trip to a water park too, where we got to see seals and loads of different birdlife,… Continue

Well, I'm back from my whirlwind travelling session, taking my eldest and youngest daughters to Italy to be with their grandparents, and I must say that it all went extremely smoothly! Everything just flowed so perfectly and easily. And the nervousness I'd been feeling about leaving my girls, especially my youngest (it's her first time) just melted away when I saw their joy and their grandparent's joy about being with them. They were all so happy!! Plus the weather over there is absolutely… Continue

As my season 2 is coming to a close, I find myself naturally pondering which intentions I would like to set for season 3. And now I've had a brilliant idea float to me, quite by chance, if such a thing exists.

Basically, the other evenings my girls were playing Sleeping Lions before bedtime to get themselves feeling more relaxed, and I had the role of adjudicator -watching for who moved first And trying to trick them into moving by making them laugh/answer questions, etc....Well… Continue 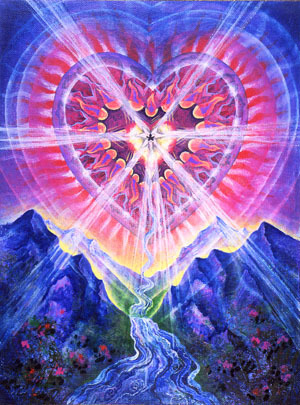 Wow. I am feeling good today. A lot better than previous days this week. But I have noticed that when I am by myself or just with my children, that I usually always feel a lot better and have a much higher vibration. When I start mixing with others (not always) but sometimes I don't feel as good anymore, and it takes me quite a bit of intentional activity to re-balance my energies again.

Now, I'm not saying that this is the… Continue

What a marvelous week it's been! Immersed fully into Summertime. We've had a very busy but lovely week. It's felt a bit like being on holiday.

I don't really know what else to write. Maybe my intentions for the week coming up:

I'd like to stay centered, clear, peaceful and calm.
I'd like to enjoy myself, and enjoy everything I do...and have fun.
I'd like to do some fun stuff with my girls.
I'd like to continue to easily keep my home clean and tidy.
I'd… Continue