Every other Monday time sheets are due... Last Monday I called in sick and therefore didn't get my time sheet in. Tuesday I came into work and the office manager was on Vacation. I put my time sheet in her box. Friday I didn't get paid. But I saw my time sheet on the secretaries desk so I thought perhaps it would be cut late. I needed the money because the house payment was due Monday (today). I went into work today and still no check. Crap. I finally ask, am I getting a check. No. Prior to all… Continue

I created my 2010 Vision… Continue 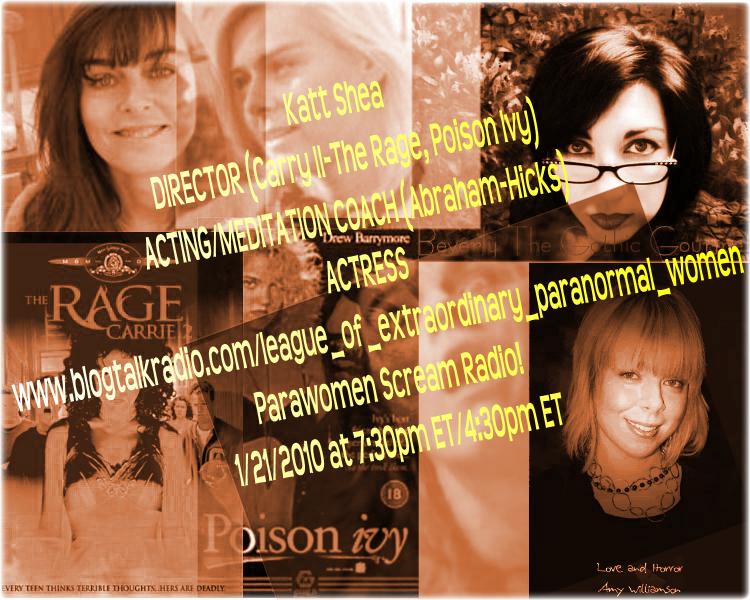 Last week I had to go to the ER for Migraine and Cramp relief. I was given a shot of a heavy narcotic and when I closed my eyes I saw my Indian Guide. This guide has been with me a loooooong time. The first time I became aware of him was at the age of 16 during a meditation class. During the group meditation I saw a very large Indian standing before me. After the meditation was complete the psychic leading the class informed me a very large… Continue

Day 38 Feelin better Kittens! Back on the Vibrational Wagon:)

I have to say that today was the first day in about 2.5 weeks that I've felt "better". I've been doing some medical testing and taking some medications that have been making me not feel so hotsy totsy. I stopped taking a medication that was making me feel sick to my stomach almost 24/7 YET made me gain weight (I gained 4 lbs in 2 weeks) and it made me incredibly sad. So yay. I'm still not 100% (but I will be by tomorrow I'm sure of it) AND it was all… Continue 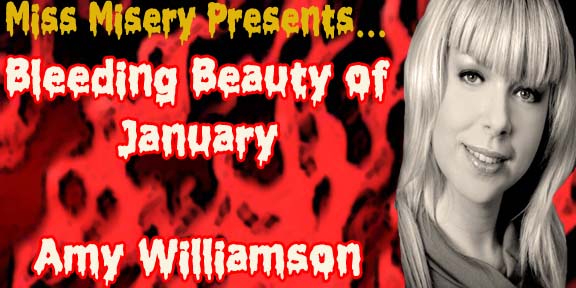 I am January's Bleeding Beauty of the Month!! Miss January if you will;) http://www.lastdoorwayproductions.com/bb_jan2010.html Woot! I've been a Miss November for a paranormal calendar, but I shared that honor with another individual (which I didn't mind because I was honored to be chosen to represent prominent women in the paranormal). And now I've been chosen to represent a… Continue

1/1/10 comes once in a Full Blue Moon! Happy New Year to all my beautiful Co/Creators lovlies!

All my Love and Horror to you!!!
Amy

Please join me on my favorite Social Networking Sites (Besides CCOR of Course)
I Love Light and I Love Horror! I'm a Scream Queen/Actress with inspiration... Quirkiness at it's best!…

Day 29... Introspective and the loss of a Loved one.

I'm feeling a bit melancholy tonight. The day after Christmas my Aunt passed away while vacationing in Florida. I have a small but close family and we normally spend every Christmas together. This year my aunt, cousin and uncle decided to spend it in Florida and due to some health issues i'm working on my husband and I decided to stay at our home (I live about 2.5 hours from all of my family).

A few blogs ago I wrote a memory I had of my Grandma Ruby and her Christmas Tree's. Last night she came to me in my dreams as did the two grandmothers that I am named after. There were a few other women there, but I sensed they were women on my husbands side of the family.

They were sitting in a room that I was running through. I was trying to shop and I had a goal to only spend a certain amount of money in each place. So a little back story, I have recurring… Continue

What a day! I was told my horoscope for the day said the uncomfortableness I've been feeling is because growth is needed to accommodate my big dreams. True! I said to my husband earlier in the day (prior to knowledge of the horoscope) I feel like a rat in a cage going around that little wheel. Then I thought about a dream I had where a bunch of Rats and Mice can running at me. If that isn't a sign what the heck is?! So Growth is the order of the day!

On the Abundance front. I posted… Continue

Today is the new moon and today is also the day my prosperity bundle I won arrived in the mail. It smells lovely. I felt tingly and excited when I opened it up. It also arrived with a green candle. I understand it's about intent and when I smell that bundle I intend to have money flow into my life;) I intend on paying off my debt and vacationing. I also intend on having money to do with as I please with. Intent. The package arrived with some chocolate as well, I intend to eat that chocolate and… Continue

My Grandma Ruby always had "unique" Christmas trees. I remember going over to her house this time of year JUST to see her trees. Her tree was the first white tree I'd ever seen. Soon after her tree was the first silver tree I'd ever seen. And I remember just looking at those trees in pure awe. Especially the white one, it lit up the whole room (and my eyes and senses) with it's red lights and red ornaments! Today I saw a few of these trees and loved… Continue

I was doing dishes today, really deep in thought and I realized I was A- doing an affirmation of what I DO want in my life, B- I was Happy, C- In the vortex and finally D- I knew it was all happening!

I realized I had just had a moment! It was like when you are about to go on stage or have a really big shoot... You know those amazing feelings, addictive feelings and I created THAT just by thinking it:) This is big! I'm feeling my… Continue

I was working on an evaluation today, it was after 5 and only one therapist and myself remained in the office. Sometimes when I write things for the court, protective services etc... It just all flows. I know what I want to say and it comes out in the jargon that is appropriate and it's all good. Today I had a block. The other therapist came in and asked if I was working late and I said just until I got the eval done and she asked what was wrong. I said I know what I want to say it's just not… Continue I went to a palm reader today and this is what she saw:)

Well i'm up late at night with a lot on my mind. Good thoughts,but on my mind none the less. I started refining my list for this season in my mind a few days ago, and even as I did this, things began to happen. Last night I actually physically went in and adjusted what it was I wanted to manifest and MORE things began to happen. Today I looked at what I had on my page and it wasn't quite right so I tweaked it one more time and another contact came… Continue

I See Myself Successful, Prosperous and Happy (and walking the Red Carpet)!

Today is a big day, I am walking my first Red Carpet with my husband as my escort. I had a major role in a horror movie and I am going to get ready for the big day! I've been having skin treatments in anticipation of today and my husband and I have been working out and eating healthy. I feel toned and strong. The first thing i'm going to do is get a facial so my skin will be glowing.

My September and October and beyond (And PHOTOS as promised)!

Where did September and October go? It just seemed to fly by, not like a butterfly but like a phoenix rising from the ashes and bursting into flames! So beautiful:)

Dial M for Murder was a huge success. It was more then I could have imagined. I'm in total amazement that my vision was created on stage. Dial M for Murder has been done thousands upon thousands of times, but it will never be done again the way I did it. And that gives me much satisfaction. And what a responsibility it… Continue

I love the fall season! I live for it and long for it especially in the summer when it's hot and Mama earth is shining on us causing my hair to be larger then life and frizzy! I dream of the days when the leaves smell rustic and the colors assault my senses in a most positive way. And here we are in the fall season and I feel such POWER.

I'm directing my first theatre production "Dial 'M' for Murder"... Last night I sat in the audience and as the glow of the set filled my senses I felt an odd feeling. And I thought it was very strange to see my creative vision on the big stage. The set is amazing. It has a warm glow to it and yet it is sinister at the same time. There is a really amazing chandelier that hangs in the middle of the set and it makes all the difference.