This is something amazing, strange and a bit scary that happened.

It all started with a promise I made to my younger cousin to make a special painting for her.

At first, things were going pretty normally. I painted a white house typical from were she was living and studying. Then I added a lemon because we could go outside shake a lemon-tree with a broomstick and get our lemon for lunch. I also drew a plant similar to the balconies existing in her town. They were forged in iron and represented plants and flowers.

It obviously made sense to me to put a ladybug on top of that plant because my cousin's first name is Joana, nicknamed "Joaninha" which means ladybug in Portuguese.

Now the weird thing is that I was obsessed with adding a rabbit to this picture... which was totally absurd because she never had any rabbit + there was no rabbit in this town + she never mentioned wanting a rabbit. She had a cat that she loved very much. But a cat didn't feel at all like something that should be represented on the painting. So, at some point, I decided to tell her about this urge to add a big happy rabbit to the scene.

She said: "unbelievable!", started laughing and wouldn't stop. Then she continued: " It's my boyfriend's last name! Coelho! (which means Rabbit in Portuguese). My jaw dropped a little. This was indeed funny but also a bit spooky.

I painted that rabbit and my cousin got her very special painting showing her ( little ladybug) awaiting for her love on her plant-balcony while  Mr. Rabbit is hopping happily down the hill to join her.

Funny how Love finds its way of expression...

Despite that  I found this a bit scary,  I would love to experience this kind of intuitive connection again. 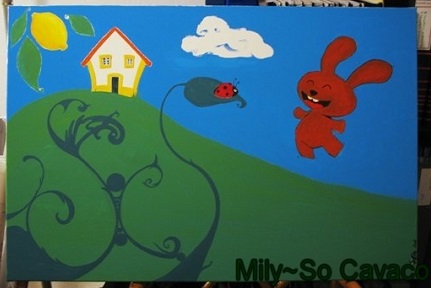 You are right, let's not be afraid of intuition about love, I'm going to take note of that , thanks! :D

you could be " imperssed" too, it sounds fun :D