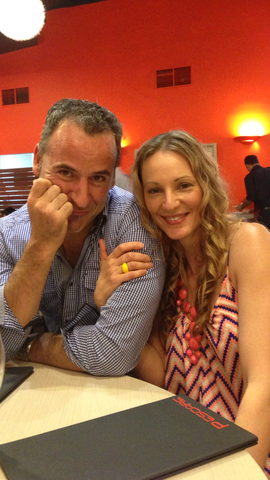 I had started season 2 not so long ago but got distracted!

I noticed that my last post was a week before my launch and it makes sense to me that I became sidetracked after that because life got crazy!!!

I launched my new program and the day went extremely well, better than I anticipated in terms of how well the content was received. It was awesome! Everybody loved the content and they were extremely engaged so a big tick to that!

I really struggled to get bums on seats and I can see why. I had no runs on the board so no-one knew anything about me or the program. The people I did have in the room gave me the feedback I needed though, they loved it and it confirmed I was on a winner.

I had 6 people sign up for that program (some online and some doing my live program) not what I had hoped initially but on the day, given the numbers I was pumped.

I had my bestie Wendy with me helping out and after the event we headed to the bar and celebrated over bubbles. She more than anyone knew the work that had gone into getting the day and those sales to occur.

When I got home Dave and I had a lovely dinner out to celebrate and after that I pretty much hit the ground running!

Dave and I headed to Thailand less than a week later!

We had an amazing time in Thailand, it really was the dream tropical romantic getaway. He was such a wonderful travelling companion and we had a ball.

After 8 days Dave flew home and I headed to a fight camp for a week. That week didn't quite go to plan, I was out of sorts, I felt like I just wanted to be alone and reflect on the year I had had (it was HUGE!) and so I didn't mix with the other people like they wanted me to or like I thought I would.

I got sick the last 2 days so came home early. It wasn't the trip I expected but it was what I needed, lots of time alone, training and no work.

Again no time to rest! My students had their final grading for the year that weekend so we had pre-grading all week then grading on the weekend. It was a great grading and then the following week we had classes before finishing up for the year.

The following week we moved house! 1 week before Christmas!

It took some doing as Dave moved from his house and I moved from mine and I have a lot of crap!

We got it all done and got settled and finally got to relax and enjoy our new home.

Dave took a couple of weeks off, the kids were away for the most part so we really got to enjoy our time together, it was pure bliss actually!

January has been on half pace really, classes start back in full swing next week and I've got to get this digital program released in Feb so time to step things up workwise hence the beginning of season 3.

I look forward to getting started, see you tomorrow on day 1!