This group is about Efficiency... this is a topic that I, myself have long needed to focus on. I find it difficult and that is why I created the $35,000 Listers Group.
You guys inspire me to be better. I am working on it... 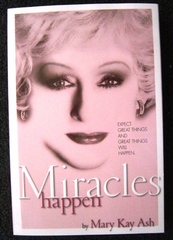 Ivy Lee, a leading efficiency expert told Charles Schwab, president of Bethlehem Steel that if Charles gave her just 15 minutes with each of his executives, then she could increase the efficiency of the company.

Schwab said, "How much is this going to cost?"

Lee said, "Nothing... unless it works. In three months you can send me a check for whatever you think it's worth to you. Fair enough?"

So, it was agreed and Lee spent fifteen minutes with executives from the struggling young steel company. Lee asked the executives to complete one single task.

Every evening for the next three months, each executive was to make a list of the six most important things he had to do the next day.

Finally, the executive was to rank the items in their order of importance.

"Each morning you begin with the first item on the list," she told them, " and scratch it off when it's finished. Just work your way right down those six items. If you don't get something fisished, it goes on the next day's list. "

At the end of the three month trial, efficeiency and sales head increased to such an extent that Schwab sent lee a check for $35,000. Now that's still a lot of cash for such a small amount of work, but in today's money, $35,000 would probably be equivalent to $350,000!

I hope this story helps someone. I decided to post this in the group to make this easier for you guys to view!

I love you guys!

1 Practice my instrument at least 3h.

2 Make an appointment for my haircut

all the best wishes,
Maria

New list
1.Make an appointment for haircut
2.Send the insurance letter
3.Call the two phone-companies to arrange with payments.
4.Call for concert tkts
5.Practice 4h
6.Get up early

all my best wishes and love,
Maria

Comment by Alyssa on March 27, 2009 at 12:47am
hey y'all... i started a thread in the discussions for tomorrow. i thought that it would be easier to group them by day rather than having one long thread on the group's comment page. It's manageable now, but when we get a few days in it will be quite long! :)

Comment by Maria on March 28, 2009 at 7:44pm
Hello $35000-listers! I am just writing to say that I keep adding my "new list" in my disc.forum list. That was the point, right? In that way I can keep a track of all of the lists in the same page! I think it works pretty well! If you have any other ideas, they are welcome, ¨
with good wishes to you all for many more achievable things,
Maria