The idea for the 100 Day challenge and Co-Creating Our Reality started in 2005. Laura Duksta and Sandy Grason, two best-selling authors and aficionados of mastermind groups where focusing at the time on “Enlightened Wealth”. Looking for a new “Millions dollar idea”, they began looking at the current reality shows on TV and saw an opportunity for creating a positive and empowering reality TV show. They starting discussing the idea of following several individuals and watching their progress as they practiced Universal laws and principles and do regularly meditation, journaling, visualization, reading, etc.

Laura and Sandy immediately thought of discussing the idea with Lilou Mace, a young Internet entrepreneur passionate about Internet technologies, online branding strategies, and the self-help industry. The synchronicity and chemistry between those 3 women was irrefutable. Co-creating our reality was born.

They named the project “Co-Creating Our Reality” as they where clear that not only are we co-creating with each other, but they all 3 believed in the power of the magical energy that is created when two or more individuals gather together for the greater good. We are co-creating with these practices, with Universal Laws and Principles and with the Divine Energy of the Universe. They wanted to acknowledge that we are always co-creating our lives and our experiences and their intention was to bring a consciousness to everyday reality.

Since they had no idea what this “experiment” would look like, they decided to take it on themselves for 100 days. They had read many, many books, learned incredible concepts from amazing teachers and attended numerous seminars, but where wondering what progress they would make in their lives if they applied all of them consistently for 100 Days. Laura and Sandy had both written books of their own, Lilou had founded few companies including an empowering portal online. But although, they met success, they had always been a certain inconsistency in results. They saw that the results where in portion of their involvement into life, and how often they would be applying those teachings and practices. Life happens. You start, you stop, you get sidetracked, taken off course.

They started recording their daily video journals with their webcams from home and upload them on Lilou;s empowerment website. The results of the experiment where visible to all. The 3 ladies decided to expand on the concept and look for new ways to make it easy for people to participate in the 100 Day Challenge worldwide and from their living room. They decided to bet on YouTube, a new Internet player at the time, that was allowing people to easily upload and share video clips. As YouTube expanded and was then bought in November 2006 by Google, the reach of each video expanded and as a consequence the number of viewers and participants.

With the success of the movie The Secret and it’s appearance on The Oprah Show, our youtube community received a flood of new participants from all over the world. Soon we were receiving videos from Asia, Australia, Ireland, Canada, South America, U.K. and all across the U.S. The community members where so enthusiastic about finding a place where they could put the tools they learned from The Secret into practice. The 100 Day Reality Challenge has since then provided the perfect structure for thousands of people, as well as a global community of like-minded people who support you in living your Biggest Vision.

You can begin your own 100 Day Reality Challenge at any time by logging onto www.CoCreatingOurReality.com and signing up! 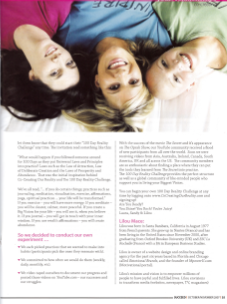 Thank you Megan(username Jewelchic - Australian participant) for your ongoing support in promoting the 100 Day Reality Challenge.